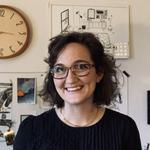 While completing her Ph.D. in biochemistry at the University of Colorado Boulder, Graycen realized how much she loved telling stories about science. She wrote and edited for Science Buffs, a CU Boulder STEM blog, before joining its leadership team and ultimately becoming editor in chief. She also founded, hosted and produced the blog’s affiliate podcast, Buffs Talk Science.

After that Graycen worked as a freelance science journalist while attending the Science Communication master’s program at the University of California, Santa Cruz. During the program, she completed internships at the Monterey Herald, Science and SLAC National Accelerator Laboratory. Her work has appeared in Symmetry Magazine, the San Jose Mercury News the Santa Cruz Local, Eos, Mongabay and more.