Interacting particle system (IPS) models have proven to be highly successful for describing the spatial movement of organisms. However, it has proven challenging to infer the interaction rules directly from data. In the field of equation discovery, the Weak form Sparse Identification of Nonlinear Dynamics (WSINDy) methodology has been shown to be very computationally efficient for identifying the governing equations of complex systems, even in the presence of substantial noise. Motivated by the success of IPS models to describe the spatial movement of organisms, we develop WSINDy for second order IPSs to model the movement of communities of cells. Specifically, our approach learns the directional interaction rules that govern the dynamics of a heterogeneous population of migrating cells. Rather than aggregating cellular trajectory data into a single best-fit model, we learn the models for each individual cell. These models can then be efficiently classified according to the active classes of interactions present in the model. From these classifications, aggregated models are constructed hierarchically to simultaneously identify different species of cells present in the population and determine best-fit models for each species. We demonstrate the efficiency and proficiency of the method on several test scenarios, motivated by common cell migration experiments. 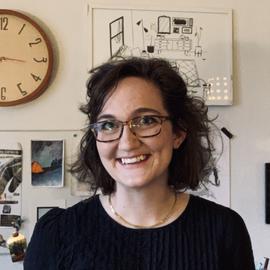 Graycen is a journalist, a biochemist, a tabletop RPG enthusiast and several other things.